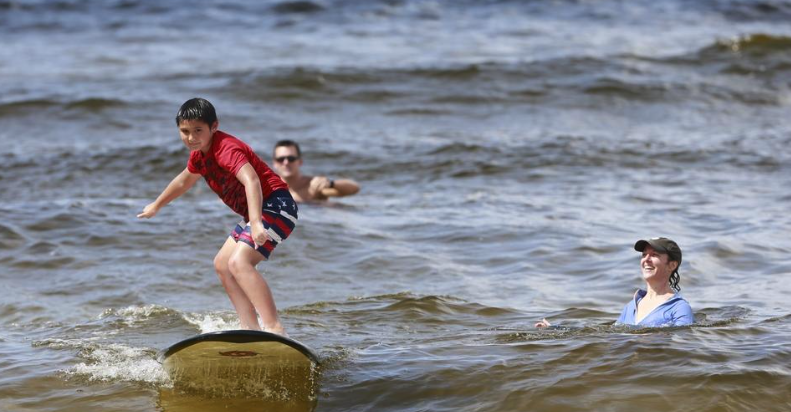 PANAMA CITY BEACH — When Mary Vaughan moved from up north to Panama City Beach four summers ago, she began looking for positive experiences for her 9-year-old son, Blake, who is autistic.

It didn’t take long before she found an unlikely match: surfing.

“I was a nervous wreck,” Vaughan said. “When he got on the surfboard and was able to stand up that first day — the look in his eyes was not concern about how others see him. He didn’t have a care in the world, and that’s what I loved about it.”

It was part of the free event called Autism Surfs PCB. Dozens of children, parents and volunteers participated in the mainstreaming event, which takes place every third Saturday of the summer months with weather permitting. The goal is to allow families to relax while their children — of all ages, with or without disabilities — learn to surf in a welcoming and supportive environment.

Julie Clark, president of the nonprofit organization Autism Surfs PCB, said that surfing not only raises awareness to the needs of children with autism spectrum disorder (ASD) and provides them with sensory experiences, but it also instills a sense of pride and confidence.

“The sense of accomplishment is huge,” Clark said. “You can tell by the smiles on their faces, and they take to it pretty good.”

Vaughan said she was reluctant at first because she was not familiar with the Gulf of Mexico, which can be daunting for a child with a disability. But once she saw the volunteers’ interactions with Blake, her concerns were set aside.

“They just have a passion for it,” Vaughan said. “They’re really giving and concerned about the emotional comfort of the kids. As a parent, it’s a relief to have people that get your kid.”

As she and Blake continued to attend the Autism Surfs PCB events, Vaughan also began establishing a support network of physicians, teachers and other parents of children with ASD, she said.

Clark said the free event began four years ago. The idea grew from her experience working in a child care center and her love of surfing. One of the children, Chloe, was diagnosed with ASD and generally wanted to be left to her own activities. However, once sand and water was added to the equation, Chloe opened up to people.

The event isn’t restricted to children with autism, though. Clark said they have taught people with a wide range of disabilities to surf. At one point, the group hosted a girl who had been paralyzed.

“She’d never touched the sand or the water before,” Clark said. “But we had her out of her wheelchair and on a surf board.”

Ultimately, people of any age and range of ability are invited to attend the free event.

“We’re all a family, and we’re all accepted,” Clark said.

The nonprofit organization provides boards, life jackets, breakfast, water, lunch and free drawings at the end for registered children. Area organizations will have free information booths on site, and participating children will receive a free T-shirt.

Clark said they always are in need of volunteers also, whether they want to get experience in the field of teaching people with disabilities or just want to help out in the community.

“They’ll definitely leave with a full heart,” she added.

Any donations of water, products to give out during the raffle or funds can be arranged with Clark. For details, call 850-527-0532, email autismsurfspcb@yahoo.com or visit the website, AutismSurfsPCB.org.

SIGN UP FOR DAILY E-MAILWake up to the day’s top news, delivered to your inbox