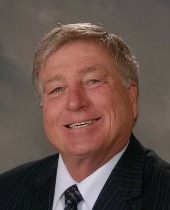 Parnick Jennings joined Jim Free Realty in August 2008. A native of Rome Georgia, Parnick attended the University of Georgia and graduated from Gupton-Jones College. He started the Parnick Jennings Funeral Home in 1977 which became known for their outstanding Customer Service, not only in Georgia but the entire nation. In 1995 he sold his funeral home to Service Corporation International and for the next 5 years under Parnick’s leadership ranked #1 in Customer Satisfaction among the top 1500 funeral homes in the United States. These same customer service skills have translated into him being recognized as someone who goes the extra mile for his clients at Jim Free Realty.

He is 2008 Past President of the Cartersville-Bartow County Chamber of Commerce where he has received numerous awards including “Friend of the Chamber “in 1995 and the “Small Businessman of the Year” in 2005. While too numerous to mention individually, he has served over 50 terms on various Community and Charitable Boards. In honor of those activities, he received the “Hometown Hero” recognition in 2008 presented by the Cartetsville Daily-Tribune News.

As a former Small Business Owner, Parnick has a wealth of experience and is uniquely qualified to guide you through all your Panama City Beach real estate needs. His deep passion, wide knowledge of real estate market conditions, and specialization in Panama City Beach Condos are second to none. He brings all of this experience to help buyers and sellers alike achieve their varying objectives in a simple, smooth and successful manner. Needless to say, he is respected by both his clients and contemporaries.