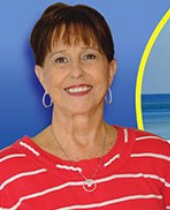 Ivanette joined the family owned real estate business in 1988 after working in the Banking Industry for several years. She soon became the Broker for the Georgia and Alabama offices as well as being the Director of the Jason Free School of Realty. In that capacity she became a leader in the Real Estate Industry and in her community.

In 1990 Ivanette became one of first non-residents to obtain a Florida Real Estate License.  She partnered with a company in the Panama City Beach area and began selling condominiums. In 2005 Ivanette moved to Panama City Beach and Jim Free Realty was domesticated in Florida.  Ivanette soon became the top condo listing agent in Bay County and has maintained that designation for the past 10 years.

Ivanette is considered an expert in in the condo market and is often called on for her advise by property owners and developers but Ivanette’s greatest  asset is how she relates to her clients and customers offering the highest quality expertise and service.  Service is Ivanette’s trademark.